This 1968 postcard shows James St. in Alexandria Bay at night. The verso says “This popular town draws thousands of visitors each year. It is the gateway to the Beautiful 1000 islands.”

The most recent Google Street View show James Street during the day, but I believe I found the exact location of the photo. On the right stands the rusted shell of the Homestead Restaurant sign and the fantastic Spot Cocktail Lounge arrow in slightly better shape.

These two undated, unmarked real photo postcards of the border between Arkansas and Missouri. After a little sleuthing, I determined that this is Highway 61, just east of Blytheville, Arkansas.

If I knew enough about cars then I could probably put a date on these postcards.

There is nothing left on the Missouri side. The Texaco and over service station are no more.

There is one solitary building on the Arkansas side. It’s hard to see in the postcard as it’s  semi-obscured by the turn arrow and 25mph sign (with a Budweiser sign) on top still stand but nearly everything else is long gone.

WHAT: Storm (Hail and snow)
WHEN: February 20, 1944 around 4:30pm
WHERE: Los Angeles, California
FATALITIES: None reported (2 minor injuries)

While not exactly a weather disaster, the snow & hail storm that struck Los Angeles 73 years ago today was so uncommon that the city was caught completely off-guard.

The hail/snow storm of February 20, 1944 started at about 4:30pm and lasted only 10 minutes. It was the heaviest storm in 13 years. The Los Angeles Times reported the storm as front page news. 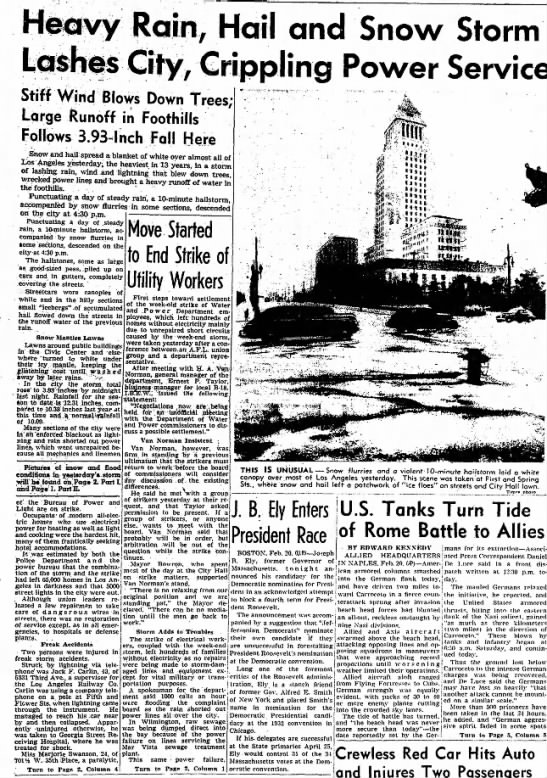 Trees were felled due to stiff winds and two people were injured in freak storm. According to the article:

Struck by lightning via telephone was Jack F. Carlin, 42 of 6331 Third Ave., a supervisor for the Los Angeles Railway Co. Carlin was using a a company telephone on a pole at Fifth and Flower Sts., when lightning came through the instrument. He managed to reach his car near by and then collapsed. Apparently uninjured otherwise. he was taken to Georgia Street Receiving Hospital, where he was treated for shock.

Miss Marjorie Swanson, 24, of 701 1/2 W. 35th Place was severely shaken up when flood waters washed the crutches from under her in the 800 block of W. Jefferson St. She was rescued from the swirling water by bystanders and taken to Georgia Street Receiving

More about the storm that hit Southern California (along with WWII news and other tidbits) from the February 21, 1944 issue of The Los Angeles Times.

The storm was brief, the damage minimal. Highways were blocked and power lines toppled but the snow melted quickly and the clean-up was hasty.

This type of storm is incredibly common in most Northern cities but for Los Angeles it was a reminder than it CAN and DID HAPPEN HERE.

Birdseye view of Chicago’s famous Boulevard Link at the junction of Lake Shore Drive and Upper Michigan Avenue, In the near background can be seen the Drake, Drake Tower apartments and other fine residential apartments overlooking Lake Michigan at the Oak Street Beach. In the far background – the Navy Pier and the Palmolive Building, topped by the Lindbergh beacon.

Mailed from Chicago, Illinois to Tammy Bohnert of Louisville, Kentucky on June 23, 1950:

I hope you aren’t forgetting to was the dishes for Lucille.
– Mother & Daddy