The store specialized in a large amount of flooring/carpeting/rugs and advertised heavily in newspapers. The advertising worked and the store became a big success.

The store was renovated in 1963 to make it more modern (see postcard above).

The original location lost its lease and closed in January 1996.

One month later Carpetime merged with Carpetmax and took on the Carpetmax name, thus ending the 37 year history of Carpetime.

Located at 207-217 Michigan Street across from the once-famed State Theatre, Robertson’s Department Store was the anchor of a once lively downtown shopping area in South Bend, Indiana. It would ultimately become the victim of a collapsed industry and a failed urban renewal plan would set the area back for years to come.

Originally founded in 1904 by George A. Robertson at 127 S. Michigan St, the original Robertson’s Department Store was a simple, one-room operation. Robertson’s offered quality goods and reasonable prices. By 1910, business has grown so much the Robertson was able to purchase the building the next door and expand the store into that location.

By 1923 the store had outgrown the space and was moved to the 200 block of S. Michigan St, at a location that once held the Studebaker brothers blacksmith shop.

The Robertson family would sell the store in 1932 to a pair of brothers, Will & Sig Welber. The Welbers would make Robertson’s a smashing success. In 1938, the Welber brothers would purchase 7,500 square feet in the building just south of the store.

Later that year, Robertson’s introduced a new concept to Indiana called “Chargea-Plate.” The idea was to provide a charge account system for customers to buy goods on credit. The store was the first in Indiana to offer this anything like that.

By 1941, Robertson’s had become a South Bend Institution. The famed tea room, located on the sixth floor, was the premier social spot in North-Central Indiana. The War would slow the store’s momentum for a few years.

Robertson’s wasn’t just for the white social elite of South Bend, the store was considered the best place in town to shop if you were an African-American. Most of the downtown shopping area was considered either unwelcoming or not available for non-white shoppers. Robertson’s actually allowed African Americans to try on clothing before they purchased. Barbara Brandy was one of the one of the first African American secretaries hired downtown at Robertson’s.

Robertson’s was truly for everyone. This Anonymous post in The Department Store’s comment section for the store provides great insight into life in South Bend Time at the time and what Robertson’s meant to the town:

Robertson’s anchored the downtown shopping experience in South Bend. A few blocks north was minor competition with Wyman’s Dept Store and there was a large JC Penney across the street from Robertson’s. Kresge’s bordered the store on the north and first Grand Leader and then the Francis Shop to the south. The bright lights and marque of the State Theatre across the street added to the adventure. Other stores right close were Osco with a beauty school above it, The Star Store, Schiff Shoes, St Joe Valley Bank, The Sherland Building, lots of other shoe stores, WT Grants and Woolworth (wood floors, tin ceilings, and fans), Richman Brothers, Granada Theatre to the north, and the Planter’s Peanut store with the peanut man.
The crowds moving up and down the streets; noises of the heavy traffic and fumes from buses/trucks; the handicapped man in front of Kresge’s on the sidewalk selling pencils; slush of the winter and heat of the summer; all in all it was a great exciting experience for us kids to be taken downtown. We’d normally park at the Sear and Roebuck store on Western Ave (free parking and eat a sandwich lunch in the car), and walk to Michgan Ave past Western Auto and that fish store. During lunchtime (not for us), but it was so exciting to watch the people stand behind someone waiting for them to finish their meal at the Kresge, Woolworth, or Grant lunch bars–very noisy with all of the glass dishes clanging.
Robertson’s was a little out of our price, but the basement offered a lot of back to school buys. A few times I got taken to see Santa there way upstairs. The big stores had escalators which was great to a kid. Penney’s for a long time had a black lady who worked the elevator for you–no push buttons.

In November 1948, Robertson’s installed the first escalators in the South Bend area, further making the store a fixture in downtown. 1950 would see another renovation that included adding air-conditioning to all seven floors.
In early 1951, Robertson’s would add a new revolutionary feature for the time called “U-ASK-IT.” Customers could push a button, wait for the operator, ask a question about any item in the store and get an immediate answer.

Throughout the 1950s, Robertson’s would continue to provide service to shoppers, brides and everyone in-between. The department store was always looking to be at the forefront of changes to technology and service. In 1962, Robertson’s, at a cost of over $250,000, installed an IBM system called “the Mechanical Brain.” The “brain” allowed anyone who entered the store to find the perfect gift. A shopper would tell the woman behind the device all of the characteristics of the person for whom they wanted to buy and the device would find the “right” item.
The guide below, from my collection, is from a Robertson’s remodel that took place sometime in the 1963.  The guide contains a map and every possible bit of information you might want to know about Robertson’s six floors (and a basement) of wonder.

Business would take a hit as the  major Studebaker factory in the U.S., located in South Bend closed in December 1963. With that closure, other industry would leave town  and South Bend would be hit by  a giant recession. Any new buildings or businesses were built in the new mall area in the next town over, Mishawaka. Downtown South Bend was dying.

In 1974, a doomed urban renewal project converted S. Michigan St. from a busy street to a pedestrian mall. The move created no passing traffic and gave further reasons for people to not come downtown and business was crippled.

After years of struggling sales and a bankruptcy by their parent company, the giant store was a financial burden. In 1982, the store closed.

South Bend mayor Roger Parent would work with ownership and re-open Robertson’s a month after closing.

However, the big building was way too much store. In June 1984, the decision was made to move in to the smaller, now vacated J.C. Penney’s building across Michigan Street. The giant building would remain vacant for several years.

The move didn’t help. After two years Robertson’s closed. The last day was June 14, 1986. The original large Robertson’s building has been converted to apartments for seniors.

By the time I arrived in South Bend in 2007, the Robertson’s Apartments were just a reminder of a once-thriving downtown shopping area.

Greetings!
We are way up high! Went to the Brookfield Zoo yesterday – ’twas fun to see all the many animals and a bear fight! I may be home Wed, but am not sure. It is so cool here. We are shopping today. Russell should have come, a girl, 18 yrs. old is here, too from Wisc. so there is pep all the time! She is a soph. at Univ. of Wisc.
Love, Mary C.

These ads ran in the Idaho State Journal (Pocatello, Idaho) on October 6, 1966.  I had fun putting this together. I was taken aback by how many small supermarkets existed in a town of about 40,000.

If you like Boston Butt, large colored chickens, electric chord organs or toothpaste twins then this is the week for you.

There’s a Founder’s Day Sale going on at ID (The Idaho Store). There are two locations to serve you: 701 E. Center and 851 North Main. Thriftway has a sale on Boston Butt Pork Roast – 43¢ per lb. Harold’s Thriftway and College Thriftway: we are home owned. Newberrys, also in the Westwood Village has their 55th Anniversary Sale going on right now. Super Values at Super Save Drugs! Get the jump on Christmas! Twister is on sale for $3.98. Thing Maker on sale $9.98. Shop now! Sprouse-Reitz Variety Stores has 20% off everything in the store every Friday & Saturday (including Halloween Goodies). Woolworth’s is having their 87th Anniversary Sale. Electric Chord Organ is on sale for $29.95. Calendar towels for 98¢…they’re pure linen. What a wonderful week to gather baskets of bargains. HARVEST TIME SAVINGS at SAFEWAY. Skaggs Drug Center at 134 N. Main Street is having a Dollar Days sale. 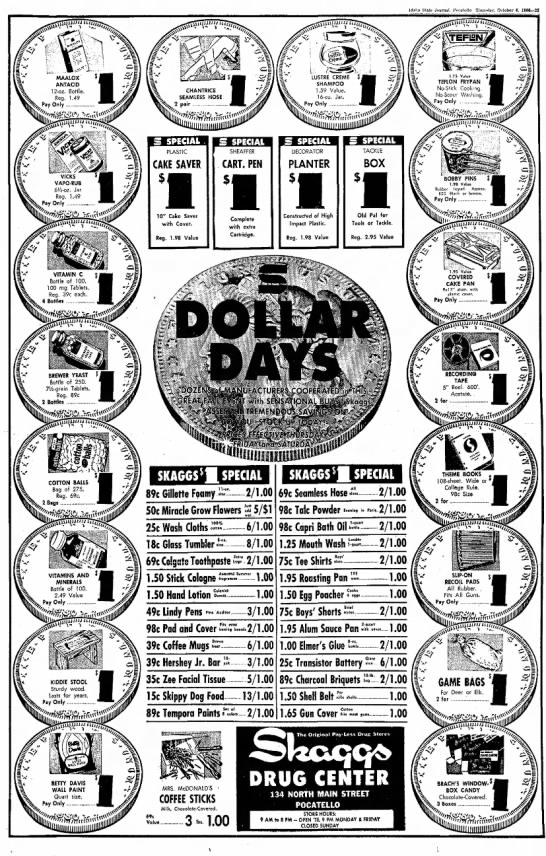 Albertson’s on E. Center Street has German Chocolate Cake (my favorite) on sale. 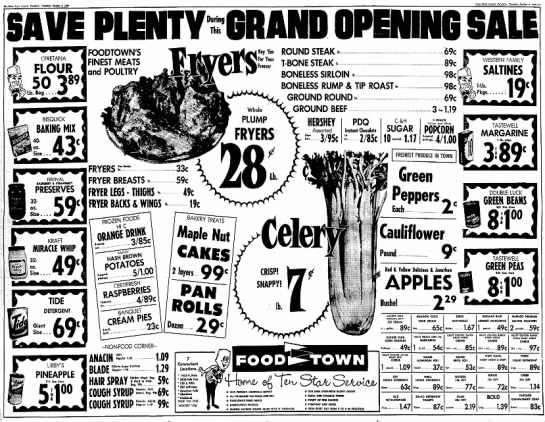 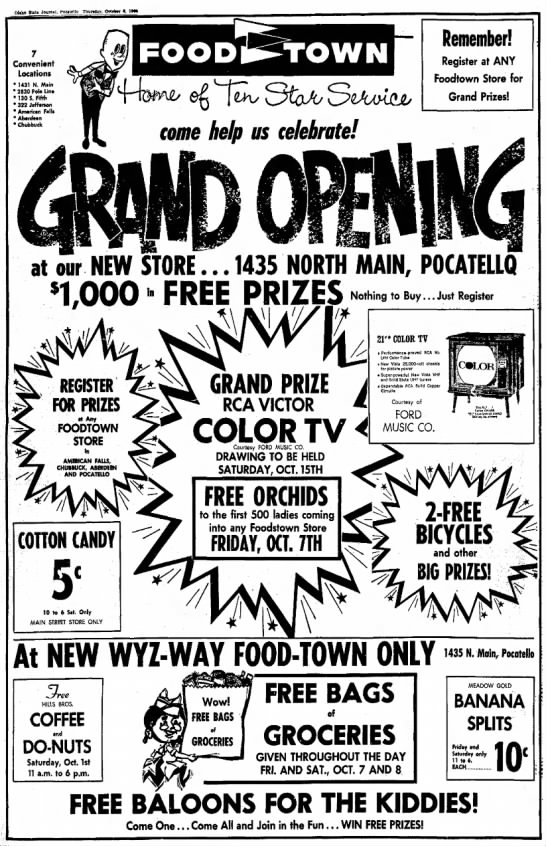