This 1968 postcard shows James St. in Alexandria Bay at night. The verso says “This popular town draws thousands of visitors each year. It is the gateway to the Beautiful 1000 islands.”

The most recent Google Street View show James Street during the day, but I believe I found the exact location of the photo. On the right stands the rusted shell of the Homestead Restaurant sign and the fantastic Spot Cocktail Lounge arrow in slightly better shape.

For more than five decades, the Red Apple Restaurant served patrons at all hours in downtown Walla Walla, Washington. After years of semi-neglect and mismanagement, the Red Apple closed in late 1999.

In 1948 the a new restaurant was opened at #57 (E. Main St. in downtown Walla Walla). The cafe and fountain, dubbed the Red Apple w under the direct management of popular restaurant Aber Mathison; Baker and Partner Gabe Gross and Fountain Manager and Partner Sam Raguso. The Red Apple was advertised as “Walla Walla’s Ultra Modern Cafe, Catering to People Who Care. Open 7 A.M. to 1 A.M.”

The restaurant thrived throughout the 1950s, but times were changing and renovations were needed. The fountain was no longer in vogue and something contemporary was needed. The idea was to add wood paneling and a fake apple tree to provide a modern, outdoor atmosphere on Main Street. This postcard, published in 1968, highlights the tree and a modern girl with a late 1960s haircut and fashion to match.

Come and Join Me At
THE RED APPLE
Under the same careful management for twenty years, this fine restaurant, featuring 24-hour service and a conference room, is located at 57 E. Main in downtown Walla Walla where the first business establishment in the city once stood. A real apple tree grew approximately where this lovely artificial tree now stands.

The Red Apple changed ownership numerous times and would struggle to remain open throughout the 90s. According to WW2020, “On January 17, 1991 the Tuckers sold the property to Greg and Gwen Baden for $165,000. On January 28th the Badens were granted a gambling license. In 1996 and 1999 there was city action for failure to pay gambling taxes. During these years the property on the corner was occupied by computer networking, telephone paging,mortgage and advertising businesses. On October 1, 1999 the property was sold by the Badens to Thomas and Amy Glase and Mark T. and Paulette R. Perry for $400,000.”

I ate at the Red Apple numerous times right before they closed. It will also have a soft spot in my heart.

A little more info on the building and the history of the Red Apple from WW2020:

Beauty Art was at #59 and the Electric Supply remained at #61 until 1953. The S.E. Washington Fair Association and the Walla Walla Feed Directors Association shared space with the restaurant. In 1954 Herb Himes Hub electrical appliances (and Henry Gies vacuum cleaners) occupied #61. In 1956 DeBunce Studio (photography) occupied #59. These occupants all continued until 1962 when #59 became vacant. On March 21, 1961 Harry Winget sold this property (135.83 feet x 86.78 feet) to Herb Himes for $107,250. In 1968 Himes transferred his interest in the area behind the store to the City of Walla Walla in exchange for the city covering Mill Creek to create a parking lot.

On November 30, 1975 Herb Himes sold his property to Whitman College for $95,888.33. The Hub continued to operated under the ownership of Phil and Sharon Van Houte and Bev and Charles Balmer. Whitman College assigned their contract to Samuel Lewis Raguso for $117,770. Sam Raguso’s estate transferred title on August 26. 1980 to Alan, Rodney and Sam Raguso who sold the property to Ronnie and Terry Tucker on November 16, 1982 for $150,000. China and Things started operations as a gift shop on the balcony at The Hub in 1981. Robert Hanson was the manager of the Red Apple Restaurant and Lounge in 1983. On January 17, 1991 the Tuckers sold the property to Greg and Gwen Baden for $165,000. On January 28th the Badens were granted a gambling license. In 1996 and 1999 there was city action for failure to pay gambling taxes.

These are photos from before, during and after the wedding.

My Grandmother Delight, My Aunt Pat, my Aunt Sue

My grandmother made her dress, the brides maids dresses and the dresses my mother and Jan wore.

Pat and my Great-Grandfather Jay Hoover

Walking Down The Aisle

Bruce and His Best Men

The Happy Couple and The Grandparents

Pat Kisses My Uncle Paul, who is about 4 years old.

Quite possibly the best reception cake ever

“Schwinn Bicycles….for the young in heart.” This catalog features every available Schwinn product in the 1968 line.

Founded 1958, in Memphis, Tennessee, the Downtowner Corporation built and operated all of its own motels. Every Dowtowner Motor Inn was located downtown and offered a no-fills, cheap place to stay for the night. The Downtowner locations were strategically placed near a large hotel or convention center in hopes that business would spill over in their direction. It worked.

The Rowntowner Motor Inn brand was introduced in 1967 to designate locations more in the suburbs than downtown.

American downtown life declined heavily in the late 1960/early 1970s. Businesses, hotels, everything was moving away from the downtown area. The hotels were struggling to stay afloat and so was the Downtowner chain.

This 1968 brochure was printed right at the beginning of the chain’s slow, downward turn.

Twenty plus locations remained open through the eighties when the company was sold yet again for a fifth and final time. By 1993 there were only two locations left. Now there are none.

The locations below are what was listed in the 1968 book. A red link means the building is gone and a blue link indicates that the motel still stands under a different name.

The postcards and clippings below will directly underneath the location posted.

1968 advertisement for the Velvet Swing – Courtesy of Atlanta Time Machine

155 air-conditioned rooms with TV, Musak, pool, direct dial phones. In the center of town, 5 blocks from UK. Bar and restaurant. 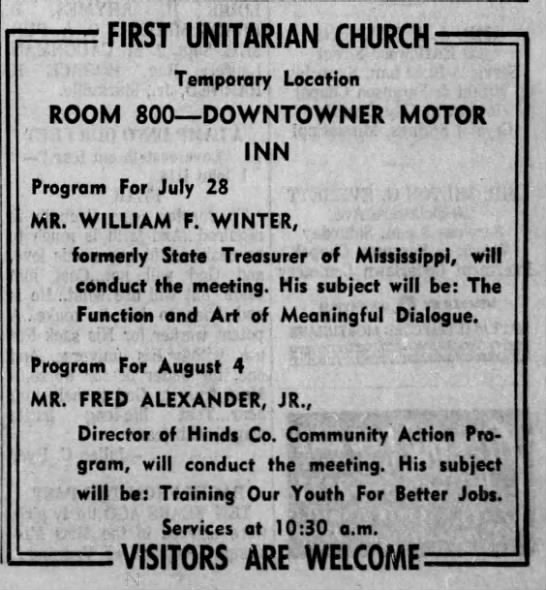 The beautiful swimming pool at the Downtowner Motor Inn, in the heart of downtown Rochester, New York. 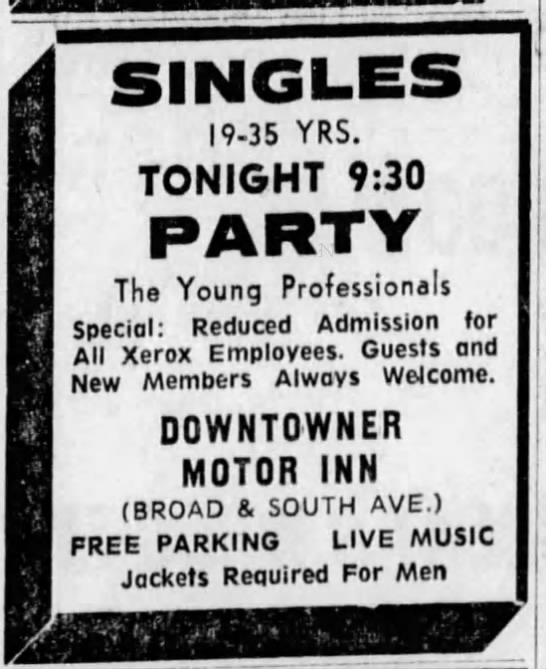 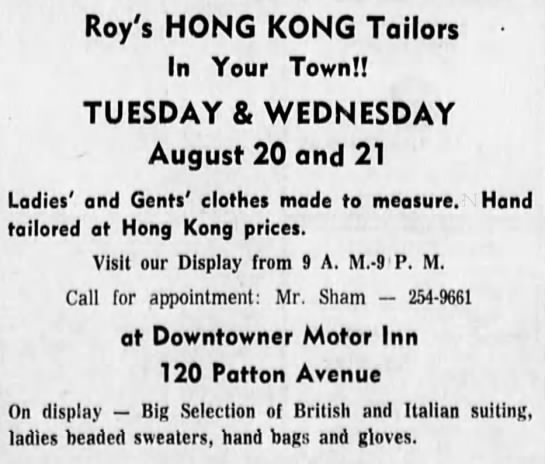 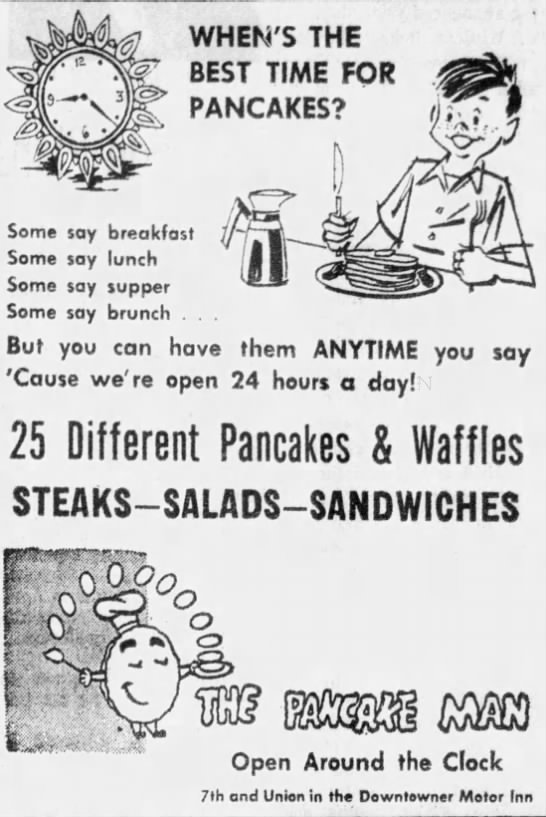 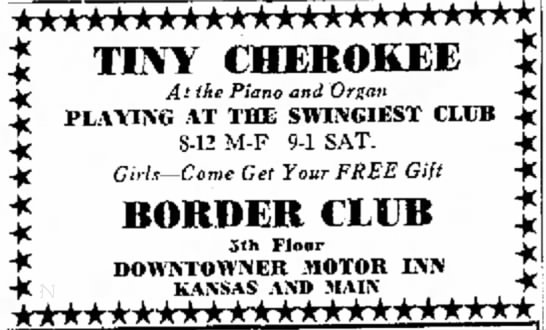 FORT WORTH
10th and Houston Streets OTHER LOCATIONS THAT EXISTED AFTER THIS BOOKLET WAS PUBLISHED:
Rochester, New York – ROWNTOWNER
800 Jefferson Road

Cincinnati, Ohio – ROWNTOWNER
I-75 at Buttermilk in Northern Kentucky

This is a Dairylea Milk and Dairy Products coloring book. The front cover has “1968” written on it but I am not sure that is year this coloring book was produced. I cannot find a year on it anywhere.