I am easing back in to posting back on here. Some deep research posts are on their way.

Until then, here’s an amazing circa early 70s postcard of the Missile Strategy Computer at the Alabama Space & Rocket Center in Huntsville

The Admiral’s Dinghy is a new restaurant, 8360 Manchester, Playa del Rey. This is an informal and attractively nautical spot – the piano bar is an old boat, the bar tables are hatch covers – geared for dropping by. The Dinghy is a sister restaurant of the Frigate at Manhattan Beach, built by a group of nonrestaurant men, known as 12 apostles, who simply wanted a good place to eat and gather. As planned by Fred Schmid Associates and managed by Chappie Foote, it should do well.
The menu is not astonishing, but they are proud of their rack of lamb and I found the black bean soup, laced with sherry, to be worth a trip. They are open seven days and seven nights, dancing every night with a special Sunday night entertainment, featuring “undiscovered Mary Kaye Trios.” Sunday bruncheons. Dinner prices from $4 to $5.25.

Admiral’s Dinghy officially opened for business on December 8, 1966. The restaurant was a very popular nightclub for many years, converting a discotheque in the late ’70s. The popularity of the disco ultimately led to its demise. By the time the fad had ended the restaurant was struggling. It was sold in 1981 and had a grand re-opening on September 2, 1981 featuring a concert by former lead-singer of the Union Gap and all-time mortal enemy of my wife Gary Puckett.

The new restaurant didn’t last long. The restaurant closed at some point in the 1980s (I cannot find a date). It later became an Acapulco Mexican Restaurant. I believe the building is gone, too.

Tugboat Annie’s was located on Route 66 (930 E. Foothill Blvd.) in Claremont, California. A grand opening celebration was held for the ship-shaped seafood restaurant on August 24, 1969. The opening featured a sample of their fish & chips, pins for the kids and barber shop quartets!

The restaurant was quite popular throughout the 1970s but but did last long in to the 1980s. In 1982 the restaurant was sold and The Original Shrimp House opened in the ship. The building still stands to this day and is still a seafood restaurant.

One of the more eclectic buildings a driver on Foothill Boulevard could expect to see was Tugboat Annie’s. Built in the shape of an actual tugboat, this restaurant offered travelers a unique dining experience. Tugboat Annie’s was eventually changed to the Shrimp House, but continued to operate out the tugboat building. One can only assume that the tugboat design generated plenty of customers, as the building is still standing on Foothill Boulevard today.

This week’s found photo takes us back to the 1940s in Miami, Florida. Club Bali was a Polynesian-themed nightclub located at Biscayne Boulevard and 8th St. The entertainment featured two live orchestras with three shows nightly.

A souvenir photo could be purchased at the club as a memento of your visit in “Miami’s Most Glamorous Atmosphere.”

This well-dressed party of three appears to be either starting or ending their marvelous evening.

Welcome back to the fourth installment of Hunt’s Tomatoes recipes features on matchbooks from the late 1950s/early 1960s.

This first recipe for something called Tomato Luncheon Quickie sounds like an abomination that some canned lunch meat scientist concocted in a lab under a bridge. The other recipe(s) is for a staple of early 1960s meat consumption, Swiss Steak.

Cut steak into four pieces. Mix flour, salt and pepper, pound into steak with edge of plate. Cook onion in hot Wesson until Golden, in large skillet that has a tight lid; push to one side.  Brown meat slowly on both sides over low heat; cover with onions. Stir in Hunt’s Tomato Sauce and water;  heat until bubbling. Cover, simmer 2 hours or until meat is  tender. Add peas 15 minutes before serving. Serves 4.

Mailed from Minneapolis, Minnesota to Miss Florence Fitzgerald of Edinboro, Pennsylvania on July 27, 1907:

Arrived here at eleven o’clock last night. Will spend a few days here. Had a fine journey and were not as tired as we expected. Are spending the morning writing and this afternoon are going out with some friends we met on the train. Ha, ha, my ears are buzzing from the noise on the streets. Imagine you hear it. 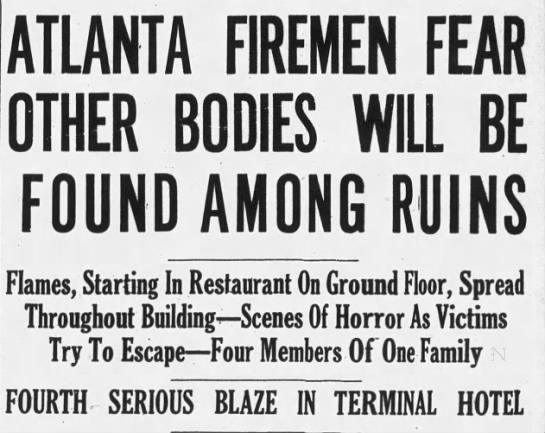 On May 16, 1938 the most disastrous fire in Atlanta’s history at time based on the loss of life, broke out in the kitchen of the Terminal Hotel. Located in the Hotel Row District in Atlanta at the corner of Spring and Mitchell Streets, the hotel mainly catered to travelers arriving and departing from the Terminal Station right across the street.

The original Terminal Hotel was built by Samuel Inman in 1906. That hotel burned to the ground in the Terminal District fire that swept through the neighborhood in 1908. A new five story structure  was re-built on that site. The new Terminal Hotel was something of a fire magnet, if such a term exists, as there had been three fires in the hotel in the 30 years it was open. The other fires were fairly minor compared to the destruction and death caused by this one.

At around 3:00 a.m. on May 16th, fire was discovered in the basement of the hotel and the alarm bell was sounded. Longtime bellhop Charlie Labon, was in the doing his early morning/late night duties in the lobby when the blaze started. Labon said he heard a boy in the kitchen scream: “Oh lawdy, fire” and then heard a muffled blast below and saw a puff of flames travel upward very quickly. 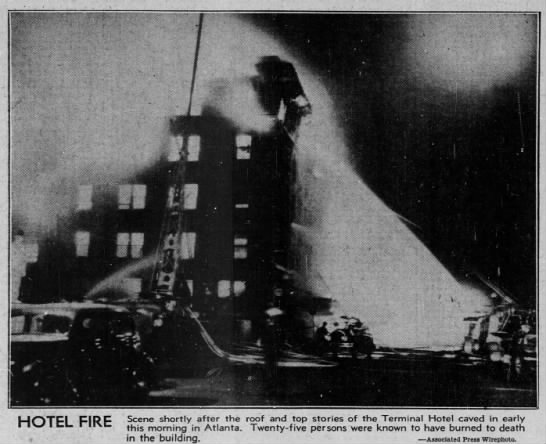 Ben Berry, the desk clerk at the Terminal attempted to  warn they guests of the fire, but the blaze had destroyed all connections. It may have been too late already. The venerable old hotel had a wooden interior and the flames tore through the place at a rapid pace blocking off fire escapes and stairs on the upper floor within minutes. Guests, sound a sleep at 3:00 am were awakened by the smoke and flames of the conflagration tearing through the building.

Firemen arrived shortly after the alarm bell sounded and they were met by an inferno. The fire department diverted local traffic due to the fear that the blaze would cause the hotel’s walls to collapse in all directions. The firefighters tried to stop the blaze with all the hoses they could muster, but the blaze was too strong. After a short time the interior and the roof collapsed. 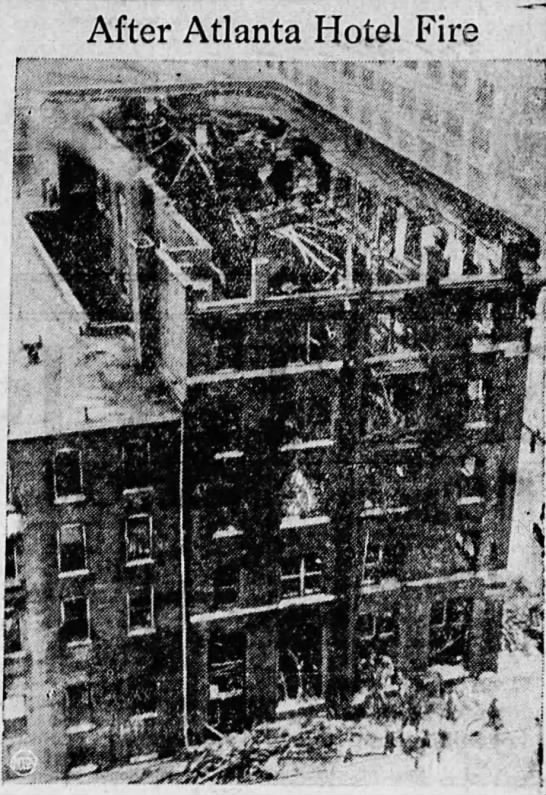 Some people smelled smoke and were able to escape quickly. Others were not so lucky. Several people were killed attempting to escape the flames by jumping out of their windows on to the street below. An entire family of four, including 2 young children were found in their room having succumbed to smoke inhalation. One victim was found dead on a second floor ledge of the hotel court, where he had attempted to jump to safety. Many of the victims were burned to death and others suffocated. Many of the bodies were horribly mangled in the collapse of floors and steel work. Amazingly, after the fire had burned itself out Mrs. Guy Coleman, was found alive in a semi-conscious state in her second-story room. She was found under her bed in the only portion of the room left after the collapse.

Hotel manager G.P. Jones and his wife survived the flames by breaking a window. The firemen saw the window break and rushed to his room and rescued the both of them.

It was initially reported that 25 people died as a result of the disaster, but that number would rise. Over the next few days ten more bodies were discovered underneath the rubble of the collapsed sections.

The hotel had only between 60 and 75 guests staying there that night otherwise the loss of life would have been much worse. The hotel 65 rooms and many were unoccupied. Many of the guests that night were railroad workers in town for only a short while.

Atlanta Mayor Will B. Hartsfield stated that the hotel was constructed in a manor no longer permitted under the building codes of the day. However, the hotel was allowed to operate due to being grandfathered in.

The cause of the fire was never officially determined but it believed to caused by a electrical spark from a ventilating fan in a grease vent in the basement kitchen. The wooden interior mixed with warm, high winds cause the rapidity of the flames.

The fire was the first major hotel fire disaster since the December 11, 1934 fire at the Kerns Hotel in Lansing, Michigan that killed 32 but it would not be the last. In fact, eight years later Atlanta would be the site of the biggest loss of life hotel fire in history when a disaster at the Winecoff Hotel would kill 119 people.

The hotel was rebuilt later that year. It was torn down quite a while ago with no evidence of the horrors that took place on the May morning in 1938.

This is a flier for the number one entertainment for the American-Jewish people, “Bagels and Yox.” This particular run was to open on Sunday, May 11, 1952 at the Blackstone Theatre in Chicago, Illinois.

I can’t find too much information on this particular run of the show. I did find a 1951 review of the play in the New York Times theater section. The Blackstone Theatre is still around but is now known as the Merle Reskin Theatre.