On the incredibly cold morning of January 3, 1940, just before dawn, a fire caused by a lit cigarette thrown down a garbage chute ravaged the Marlborough Apartment Hotel in Minneapolis, Minnesota. The cigarette has probably been smoldering for hours before finally catching fire and eventually blew out of the garbage chute, causing a heat explosion to tear through the building. The fire would be the deadliest in the city’s history with nineteen people and one puppy having lost their life on that cold January morning.

The Marlborough hotel was located on the southern edge of downtown Minneapolis at the corner of Third Avenue South and Fifteenth Street. The fairly small three-story building had opened in 1895 and had never had many problems. The hotel had been inspected many times had no violations on record.

At around 5:45 am, the hotel’s janitor, Otto Knaack was in the basement and heard an explosion. Knaack would tell local reporters of the events:

“When I opened the door, something tossed me back into the areaway in the basement. All the windows in the boiler room were blown out. I got up and went to get my wife and my baby out of our apartment. Then, I went up to the first floor to get my daughter and her roommate out of their rooms. By the time I roused them, the first floor was burning so fiercely we couldn’t get out. We had to jump to the ground 6 feet below. The whole place seemed to go up in flames suddenly.” 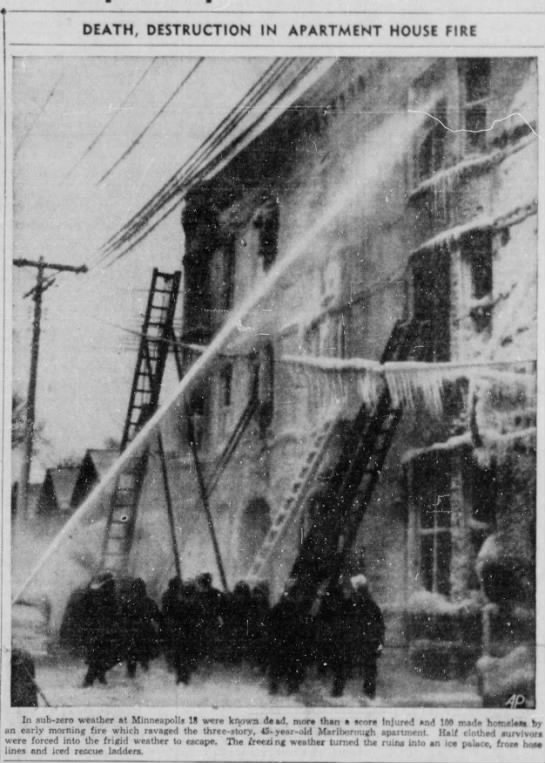 As flames scorched the hotel, the guests numbering at least 115 began to panic. Some on the lower floors were able to escape through their windows, other managed to make it to a stairwell and make it to the frozen street below. However, 19 souls were not so lucky.

Witnesses would later say that heard screams emanating from the trapped people inside the hotel. They would also report that as they could see people on the second and third floors smashes windows with shoes, chairs, even their bare hands in a frantic effort to flee the flames. One man on the third floor was seen pushing his wife out of the window, right before he jumped to the pavement below. She died, he survived.

A local cab driver named Henry Kadlac happened to be passing by the Marlborough when the conflagration erupted. Instead of watching, mouth agape like many other, Kadlac sprung in to action. Kadlac stood outside windows and caught children that were thrown out of the upper floor windows by their parents. He would be hailed a hero.

Firemen struggled with the fire, the elements and with the terrified victims of the fire.The cold weather had cause many of the hoses to freeze, slowing the effort. The ladders for the upper floors quickly became iced over with the cold water being sprayed on the flames, making them dangerous. One fireman and a hysterical guest were seriously injured when the guest panicked and struggled to get free causing them both to slip and fall two floors from the frozen ladder.

Minneapolis Firefighters trying to move an iced-in County Morgue truck during the fire at the Marlborough Hotel. Courtesy of the Minnesota Historical Society/Star Tribune

By the time the fire was officially put out, 19 people had died and over 50 had been injured. The guests that escaped without injury had to endure the weather with little to no preparation. Firemen would provide blankets to those lucky enough to almost freeze to death.

The hotel was completely destroyed and would never be rebuilt. The wooden interior along with highly flammable curtains caused the old hotel to ignite quickly and destroy everything in its path. Had the temperature outside been warmer the disaster inside could have been much worse.