The following article, written and photographed by Lee Heiman, appeared in the Courier-Journal on October 16, 1960: Keeping Up with the Joneses, a difficult matter anywhere or anytime, is particularly nerve-wracking at a certain restaurant on U.S. 62 at the west edge of Bardstown.
This isn’t because of high prices but because of the large number of Joneses.
There is an inkling of it in the name – Jones’ Kentucky Home Restaurant – but nothing to reveal that here is indeed a hotbed of Jonesism. 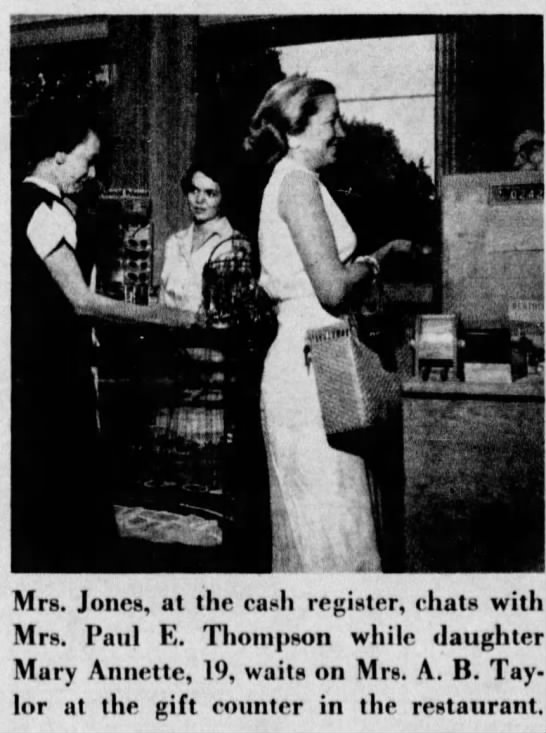 On a clear day you can see 16 Joneses at this location. If you are having a meal here, it is conceivable that 13 of them may have a part in it.
Heading the list are Mr. and Mrs. William E. Jones, who own and manage the establishment. The others are 11 of their 14 sons and daughters:

Mary Annette, 19, is bookkeeper and operates the gift shop at the front of the restaurant.
Barbara, 18, works the breakfast shift, 7 to 3, as a waitress.
Twins Marolyn and Carolyn, 17, handle part of the dishwashing chore in the kitchen
Bill, Jr., 16, works at the grill and helps with the stock and the cleaning.
Wanda Marie, 14, is a waitress and sometimes cashier.
Betty Sue, 13, hands out menus, puts water in place for costumers as they arrive, and cleans tables afterward
Mary Michelle, 12, better known as Mickey, does about the same kind of work as Betty Sue.
Joseph Francis (Frankie), 11, helps with dishwashing.
Gerry, 10, makes toast, helps the breakfast cook and carries orders to the serving window.
Jimmy, 8, picks up paper on the grounds. 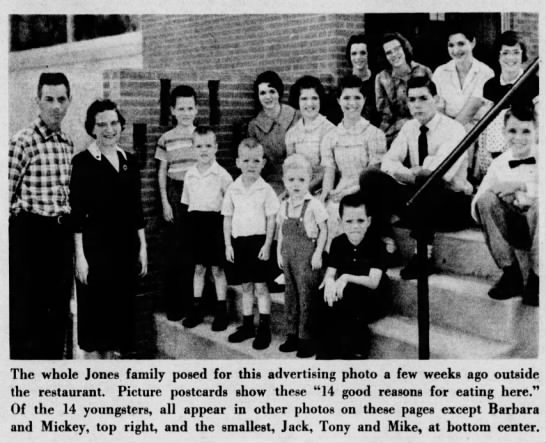 Three other young Jones – Jack 5, Tony, 4, and Mike, 3 – aren’t on the payroll yet. At this point they’re only in the mouths-to-feed category. The older youngsters take food to them in the Jones house next to the eatery.
Even with all their help within the family, the Jones still have to employ eight others in the kitchen and 12 additional waitresses. The youngsters work mostly on weekend while school’s in session but nearly every day in summer.
They began their business five years ago with a 75-seat restaurant and today, after additions, have a modern, 250-seat establishment.
Two of the employees who have been with them since the beginning, and are credited by the Joneses with providing much of the know-how which assured success, are still working at the restaurant today – Mrs. Nita Howell as a waitress and Willie Lee Hickman as chef. Four other original employees are there, too.
Members of the family punch the time clock along with the rest of the employees. Most of the older kids draw individual checks. The younger ones – except Jimmy – get a lump check which is deposited in the bank for future use, and for spending money they receive an allowance of $1 a week. Jimmy gets 50 cents.
One the wall are baby pictures of all 14 of the young Joneses with the notation, “14 Good Reasons For Eating Here.” 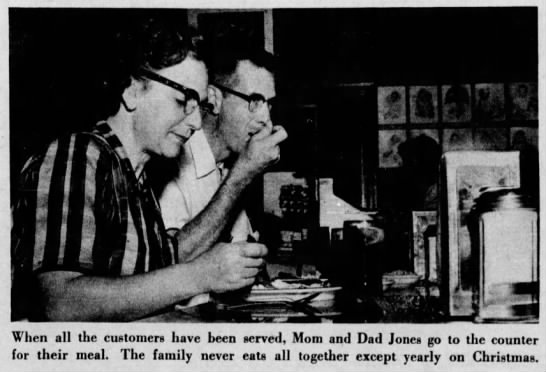 The restaurant is closed one day each year – on Christmas. “That’s the children’s day,” said Mrs. Jones, “and we wouldn’t spoil it for the world.”

The Jones’ Kentucky Home Restaurant story began in 1945 when three brothers, Robert, Tucker and Harry Hagan joined forces with Edward “Bill” Jones to operate Bardstown, Kentucky’s first commercial dairy, H and J Dairy. The dairy supplied milk to all the schools in the area and did pretty well. A few years later another commercial dairy, supplied with Dean’s Milk opened. Armed with a big overhead and more capital, the new dairy began to win local school contracts, but Hagan and Jones knew there was not enough money coming in to keep four families happy.

Bill would go home and talk it over with his wife Wyanda and realized that the dairy could not support the then already enormous family of 13. Bill and Wyanda’s lived on five acres of land on West Stephen Foster Avenue in Bardstown. Directly across the street from their house a new motel, the Old Kentucky Home motel was under construction.  That gave the Jones an idea.

Travelers to Bardstown and Stephen Foster exhibits would surely stay in the motel and they would need a place to eat. The Jones’ could use the land they already owned and build a modest eatery for the motel patrons. Bill went back to the Hagans and asked to be bought out of the dairy. The brothers obliged.

Bill would have the money he needed but need to convince the local zoning board to change the property the Jones’ owned to a commercial zone so they could build the restaurant. The zoning change was approved at almost the same time as a 12th child, Jack, arrived.

Jones’ Kentucky Home Restaurant opened  for business in 1955.  Intentionally starting  small and slow they hoped they could ease in to owning a restaurant. For weeks they were opened without a sign on the outside, but that didn’t matter.When the 75-seat restaurant opened on that first day, the place was absolutely packed. There was even a line. Business was good.

The restaurant was open from 6:00 am to 9:00 am on everyday but Christmas. As the 1960 article above states, the Jones would utilize a good many of their kids in the restaurant. It truly was a family affair.

The restaurant was so successful that expansion and renovation was needed almost immediately. There would be five such expansions to increase the seating capacity to over 225 persons. The Jones’ would also expand their family three more times and finally stop with FIFTEEN children.

Bill and Wyanda would remain in charge of the restaurant until their retirement in 1974. Two of the sons, Bill and Frank would take over the restaurant for a short while. Then Jack, another son, and his wife Lisa ran it for a bit and then Marie, another Jones, took over the helm. Business was slowing to a crawl until the restaurant finally closed in 1985.

Generic looking apartments now occupy the space where a husband and wife and their umpteen kids once provided 12, then 14, then ultimately 15 good reasons to eat the food at Jones’ Kentucky Home.