The original Carolina Pines restaurant opened in either 1923 or 1924 or 1925 (even the restaurant would use all three years in their advertising) at 4619 Melrose Avenue in Los Angeles. The proprietor, Rose Satterfield, opened the small cafe and tea room in with a seating capacity of just 12 people.

Rose Satterfield was described by the Los Angeles Times as a “tiny, dimpled, gray-haired widow with merry blue eyes, who knows she looks well in pink.” She was born and raised in Asheville, North Carolina and had no intentions of working for a living.

However, in early 1924 her husband died and Rose had to find a way to earn a living. With $600 to her name, she moved to Los Angeles in hopes of finding prosperity. Satterfield knew that she could provide delicious Southern cooking in an area that did not have authentic Southern food. The restaurant succeeded and became a success.

In September 10, 1929 the restaurant moved to its own building just down the road at 7315 Melrose Ave and the seating increased to over 200 people.

A renovation took place in 1931 and the hours were extended from 1pm to 8pm during the winter months and the restaurant was finally open on Sundays.

Over the years, the Carolina Pines gained a reputation as a place with good food and moderate prices. As the Depression gained a stronghold in Los Angeles, prices were reduced in order to lure customers to the restaurant to spend their hard-earned money.

Satterfield was known for closing the restaurant once a year for at least two weeks to go on a summer vacation. However, during the 1932 Summer Olympics that took place in Los Angeles, the restaurant and tea room remained opened to accommodate the numerous people from all of the world that were in town to watch the games.

Carolina Pines became known for its homemade pies. Rose made every single pie by hand, almost 600 pounds worth of dough a day. The pies, served in the Tea Room, became the Carolina Pines go-to-food. In 1933,  Satterfield announced that you could purchase a pie for home consumption. The move proved to be popular and business increased even more.

As the years went, Carolina Pines became a Los Angeles 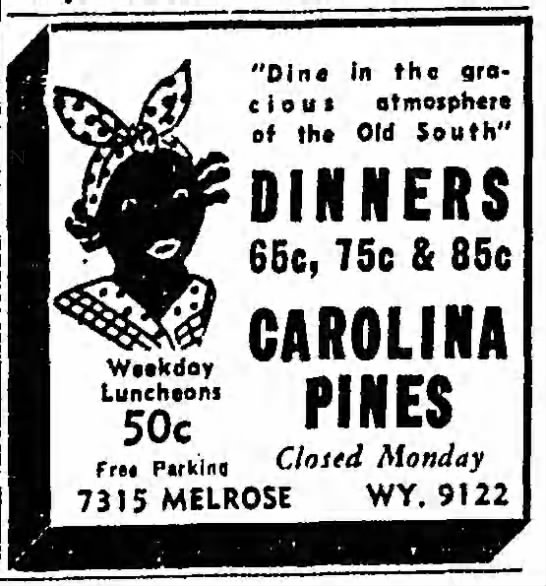 restaurant institution. The pies, the desserts, the hot rolls and  the Southern Hospitality all felt authentic. Unfortunately, the racism of the day, especially Southern racism and the restaurant’s use of  African-American servants and “Mammy” added an extra element of Southern authenticity.

1940s and 1950s advertising for Carolina Pines featured a racist caricature of a black woman telling patrons to “Dine in the gracious atmosphere of the Old South.” Later in the decade a minstrel show was added as part of the evening entertainment.

On January 10, 1947, two well-dressed, armed bandits walked into the restaurant and forced cashier Nellie Paynter to hand over the contents of the register. The thieves got away with $1089. I never found any evidence that the pair was arrested.

Rose Satterfield died in 1938 at the age of 63. The new owner was Julius Davidson. After a few years, ownership would be passed to his sons, Stanley and Marvyn and their business partner Sumner Ravitch.

To celebrate the remodeling the existing restaurant as completed remodeled. More seats were added, a new parking lot built, and a cocktail lounge added. The cocktail lounge was a change for the old restaurant, as for years Satterfield swore that the restaurant didn’t need a bar or lounge to survive.

On November 27, 1953 the restaurant was robbed again to by two men at gunpoint. However, Davidson was able to call the police and give a description of the men and their car. The men were arrested hours later with several thousand dollars and a loaded pistol in their possession.

In the summer of 1955, it was announced to the newspapers that a new Carolina Pines restaurant would soon open at the corner of La Brea and Sunset in Los Angeles.

The new restaurant was  designed by noted Googie-style architect Eldon Davis, would be ultramodern in its design and amenities. A 40-foot sign, emblazoned with the Carolina Pines, Jr. name in neon, would be 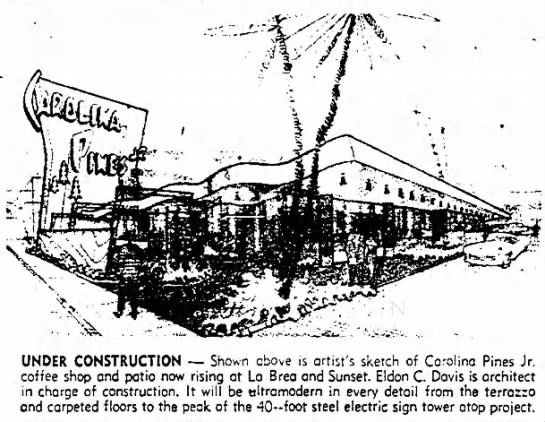 Carolina Pines, Jr. opened in October 1955 and it become an immediate hit. The restaurant catered to third shift workers, night owls and insomniacs. The food was good and cheap and the coffee plentiful.

Postcard from my collection of the original location

In 1960, the original Carolina Pines would change locations to a newer, modern space. Davidson felt the move was a necessary step to  help bring in newer clientele and distance the brand from its Southern, more race-driven past. A Geisha Room would be a fixture of the new location at Century and Aviation across from Los Angeles International Airport. The restaurant, now called Carolina Pines International, opened in April 1960.

A new location, another Carolina Pines Jr., also designed by Armet & Davis was announced in June 1961. The new location at 6th and Vermont in Midtown featured an unusual and beautiful design. 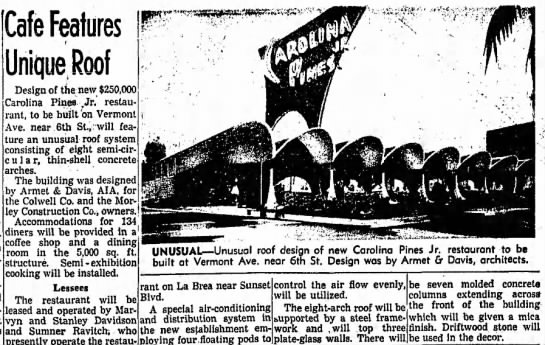 The $250,000 restaurant would hold 134 patrons in the 5,000 square foot space was designed with a roof system of eight thin-shell concrete arches and an air-conditioning system that could control the air-flow evenly. How I wish I could have seen it.

The Davidsons and Ravitch would ultimately sell the franchise to the Hyatt Corporation in 1968 .Shortly after the announcement all three Carolina Pines Jr.  coffee shops would be re-branded as Hyatt Coffee Shoppe locations. Within three years the Hyatt Coffee Shoppe brand would fold and every location closed. After nearly 50 years, the Carolina Pines name ended with a whimper. The buildings would all be torn down by the 1980s.