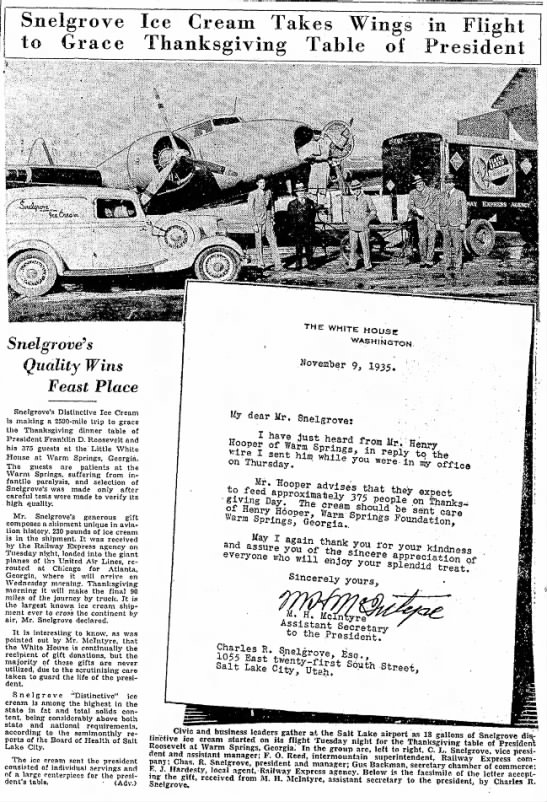 As Snelgrove’s started to gain a reputation, Charles Snelgrove had an idea that would prove to be a smart one.

In 1931, Snelgrove saw that the Paramount and Capitol Theatres in Salt Lake City had recently purchased refrigerators and he saw an opportunity. He donated gallons of ice cream to the theatres but not for them to sell. The ice cream was to be given to the patrons.

In 1935, Snelgrove’s sent ice cream to President Franklin Roosevelt’s Little White House in Warm Springs, Georgia for 375 guests at at Thanksgiving feast. The guests loved it.

During World War II, Snelgrove’s, like many other companies, sacrificed and had to adjust in order to stay in business. Snelgrove’s reduced their menu from 32 flavors to 15 due to difficulty obtaining enough milk and cream.

Snelgrove’s survived the War and successfully expanded their business.  In the 1930s there were three locations: 1055 East 21st South, 307 South 4th East and 222 East South Temple in Salt Lake City.However, by the end of the 1950s there was only one location remaining at 850 East 21st South.

It wasn’t until the 1960s that the business expanded and a manufacturing facility and a newly built ice cream parlor were built just a few blocks west, at 850 E. 2100 South.

Snelgrove’s at the 2100 South location was famous for its large, rotating, double-scoop, double cone sign.

The sign was YESCO’s “first three-dimensional design. The giant cone  was built on a metal frame with wire mesh on it to give it its form and the entire thing was then covered in fiberglass. It was painted pink and brown to represent a strawberry and chocolate ice cream cone.

The cone worked almost too well. Snelgrove’s couldn’t keep up with the orderes for the strawberry and chocolate cones like the one on the sign.

Snelgrove’s was just an ice cream parlor, they also packaged and sold their ice cream at grocery stores around the region. They also made chocolates.

Snelgrove’s struggled to survive as cheaper ice cream came to dominate the market. In 1991, the Snelgrove’s sold the company to MKD Distributors and all of the stores were closed.

According to this article by Amy McDonald in the Salt Lake Tribune:

In 2008, Dreyer announced it would stop producing Snelgrove ice cream because of business realities, a company spokesperson told The Salt Lake Tribune.

Squirrel Brothers Ice Cream, at 605 E. 400 South, formerly a Snelgrove franchise, was the last shop to offer Snelgrove brand ice cream. The building is now occupied by a Jimmy John’s, but the double cone still spins atop the sandwich shop, albeit painted completely black.

In the coming weeks, the names Nestle and Dreyer will be added and, Dreyer factory manager Laura Adams said, the ice cream scoops’ original flavors — er, colors — will be restored. And what will become of the original Snelgrove neon lettering? Dreyer has promised to give it to the Sugar House Community Council, which plans to preserve it along with other historical signs in the area.

The sign is such a part of the Sugar House area of Salt Lake City that it was featured on a 2002 Winter Olympics pin.

Leave a Reply to Graphics From Pond Cancel reply