The genesis of the Francisco Grande Inn dates back to before 1957 when the New York Giants owner Horace Stoneham fell in love with Arizona. The Giants spent many years of Spring Training in Arizona and Stoneham, who had inherited the Giants from his father in 1936, would make the trips with the team and fell in love

In 1957 the Giants announced that due to dwindling attendance, an aging stadium and the siren call of the West, that they would move to San Francisco for the 1958 season.

The baseball facility opened in 1959. The team would spend several weeks at the beginning of spring, training at the facilities but staying elsewhere.

Stoneham had dreams of a baseball complex where the players could train and stay with fans and businessman all in the same complex.

Stoneham invested more than $3 million making his dream a reality. He hired hotel industry people, as well as baseball lifers to run the sprawling complex. Rosy Ryan, former manager of the Phoenix Giants AAA team, was hired as executive administrator while he was still the vice-president and general manager of the Tacoma Giants.

The most famous aspect of the Inn was the swimming pool is in the shape of a baseball bat, and the hot tub shaped like a baseball.

Stoneham and his partners, which included singer Pat Boone were hoping to make Casa Grande a desert luxury town for the rich and famous. They misjudged. New interstates were being planned nearby. However, Interstate 8 came to be located 4 miles south and Interstate 10 seven miles to the east.

Casa Grande remained a quiet town, save for the six weeks the team would come to town.

The Giants would move all of their Spring Training facilities to Scottsdale, Arizona in 1981. After two decades, the team moved on.

The next year the California Angels signed a 10-year contract to train and play 15 spring games in the area. That pact lasted two years. That would be the last time Francisco Grande would ever host baseball.

The Denver Gold of the USFL trained their for one year before folding. The Arizona Rattlers trained there the year after, and then the USFL cease operations.

No one else moved in.

The Francisco Grande had undergone many changes over the years. Horace Stoneman sold the property in 1976 to the Hanna Mining Co. and Getty Oil after copper was discovered nearby. The property was sold again in 1984 to Gene Lynn, owner of several nursing homes.

When Lynn bought Francisco Grande, all that was left was a dated hotel, baseball fields that hadn’t seen action in several years and a nice golf course.

Almost immediately after purchasing the hotel in November 1984, Lynn closed it.

Late in 1985, the Casa Grande re-opened relying heavily on its golf facilities. It worked. There was an $8 million renovation that occurred in the early 2000s that brought back some of the luster to the old place.

The Francisco Grande Hotel still stands in the desert. The parking lot is still mitt-shaped, the bat-shaped swimming pool remains and other baseball related architecture can be spotted around the complex as a reminder of when the Giants spent their springs calling the inn home.

The following article appeared in The Arizona Republic on February 17, 1963: 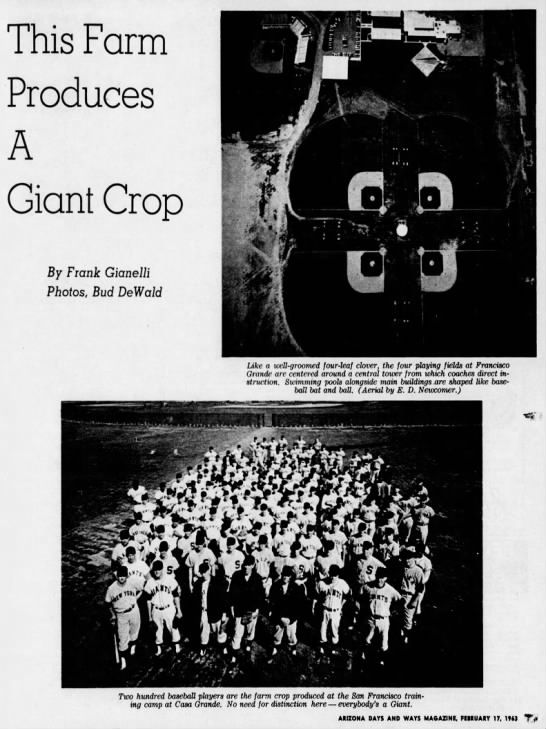