The following article, written by Ink Dipper, appeared as a syndicated column in newspapers in the last week of September, 1976: 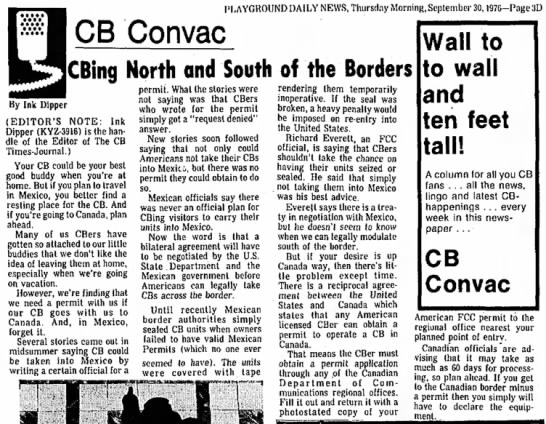 Your CB could be your best good buddy when you’re at home. But if you plan to travel to Mexico, you better find a resting place for the CB. And if you’re going to Canada, plan ahead.
Many of us CBers have gotten so attached to our little buddies that we don’t like the idea of leaving of them at home, especially when we’re going on vacation.
However, we’re finding that we need a permit with us if our CB goes with us to Canada. And, in Mexico forget it.
Several stories came out in midsummer saying CB could be taken into Mexico by writing a certain official for a permit. What the stories were not saying that simply got a “request denied” answer.
New stories soon followed saying that not only could Americans not take their CBs into Mexico, but there was no permit they could obtain to do so.
Mexican officials say there was never official plan for CBing visitors carry their units into Mexico.
Now the world is that a bilaterial agreement will have to be negotiated by the U.S. State Department and the Mexican government before Americans can legally take CBs across the border.
Until recently Mexican border authorities simply sealed CB units when owners failed to have valid Mexican Permits (which no on ever seemed to have). The units were covered with tape rendering them temporarily inoperative. If the seal was broken, a heavy penalty would be imposed on re-entry into the United States.
Richard Everett, an FCC official, is saying that CBers shouldn’t take the chance on having their units seized or sealed. He said that simply not taking them into Mexico was his best advice.
Everett says there is a treaty in negotiation with Mexico, but he doesn’t seem to know when we can legally modulate south of the border.
But if your desire is up Canada way, then there’s little problem except time. There is a reciprocal agreement between the United States and Canada which states that any American licensed CBer can obtain a permit to operate a CB in Canada.
That means the CBer must obtain a permit application through any of the Canadian Department of Communications regional offices. Fill it out and return it with your copy of your American FCC permit to the regional office nearest your planned point of entry.
Canadian officials are advising that it may take as much as 60 days for processing, so plan ahead. If you get to the Canadian border minus a permit then you simply will have to declare the equipment