This is an advertising postcard for Championship Wrestling from St. Louis on Friday, September 24, 1948.

This was a really interesting find for me. Most people don’t know that I am a fan of this history of professional wrestling. In my years of collecting I had never come across anything like this.

There is nothing particularly interesting about the card that took place on September 24, 1948 but that year was one of the most pivotal years in the history of professional wrestling and for St. Louis entertainment.

The main event  of this card featured a One Fall to a Finish between Enrique Torres (the Mexican Mat Sensation and Conqueror of Wild Bill Longson) and the legendary N.W.A. (National Wrestling Association – not THAT NWA) champion Lou Thesz.

Lou Thesz won the National Wrestling Association title from Wild Bill Longson a few months before this on July 10, 1948.

Orville Brown was the other NWA champion. It was all very territorial and confusing.

Before the National Wrestling Alliance was founded in 1948, there were many regional professional wrestling promotions across North America (each promoting its own “World” champion). None of them, however, had backing or recognition outside of their own respective geographic base-areas.

The concept of the NWA was to consolidate the championships of these regional companies into one true world championship of pro wrestling, whose holder would be recognized worldwide.

In 1948, Paul “Pinkie” George, a promoter from the Midwest, founded the original version of the National Wrestling Alliance with the backing of five other promoters (Al Haft, Tony Strecher, Harry Light, Orville Brown, and Sam Muchnick). This newly formed NWA Board of Directors wanted Brown to be the first-ever NWA World champion.

However, on November 1, 1949, Orville Brown suffered a career-ending automobile accident and 26 days later Lou Thesz was awarded the title.
The Mississippi Valley Sport Club had a

Here’s a little history of the Mississippi Valley Sports Club. Special thanks to the Legacy of Wrestling website:

Martin Thesz became the “front” for the organization in the St. Louis market and the
promoter of record for all shows.  At that point, Lou Thesz was in the midst of a heated war in St. Louis against rival Sam Muchnick.  Muchnick, in July 1948, helped form the National Wrestling Alliance, a cooperative union of bookers looking to better assist each other in rivalries such as the one he was engaged in.  With assistance coming in from Al Haft in Ohio and Tony Stecher in Minnesota, Muchnick was looking to get an upper hand on his enemy.
This wasn’t a staged “war” as seen so many times in pro wrestling, but a serious business conflict that would see the winner capitalize on the huge St. Louis wrestling market.  There was a great deal of money on the line, and neither Muchnick nor Thesz wanted to give up.

However, all things must come to an end one way or another. Muchnick and Thesz met in 1949 and figured out a way to meld their interests.  The St. Louis conflict officially ended in August 1949 with the two men becoming even partners.  However, another source stated that Muchnick held two percentage points more than Thesz.

To maintain the illusion of competition in St. Louis and to keep the integrity of the two individual promotions, both the Mississippi Valley Sports Club (Arcade Building) and Sam Muchnick Wrestling Attractions (Claridge Hotel) offices remained opened.  In front of the public and other state officials, there was never a peace agreement.

Simply, Muchnick and Thesz didn’t want people to know that there was now a monopoly over the booking and promotions of pro wrestling in the city.

Back to this specific card for that night.

The results, as reported by the St. Louis Post-Dispatch on September 25, 1948: 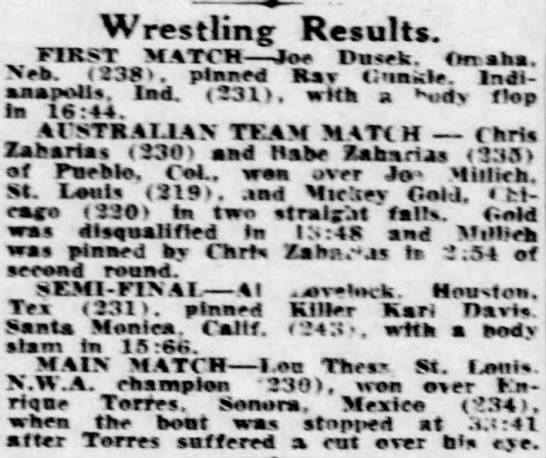 Note: The scan is a little blurry so I decided to type out the results as well.

FIRST MATCH – Joe Dusek pinned Ray Gunkle with a body flop in 16:44
AUSTRALIAN TEAM MATCH – Chris and Babe Zaharias beat Joe Millich & Mickey Gold in two straight falls, Gold was disqualified in 13:48 and Millich was pinned by Chris Zaharias in 2:54 of second round
SEMI-FINAL – Al Lovelock pinned Killer Karl David with a body slam in 15:66 (has to be either 15:06 or 16:06)
MAIN EVENT – Lou Thesz defeated Enrique Torres when the bout was stopped at 33:41 after Torres suffered a cut over his eye.