Anybody who has been following me for any length of time, knows that I am constantly telling people about the hidden gems known as QSL cards.

QSL cards aren’t hard to explain but it’s a little hard to keep the description succinct. I found a blurb in The Neosho Daily News on March 25, 1976 that explains QSL cards in simple to understand terms. 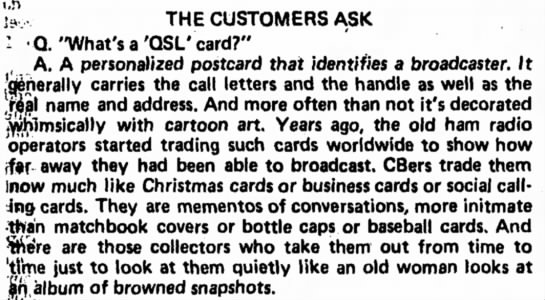 As the article states, QSL cards originated as souvenirs/trophies of a radio user’s on-aor connection. When a radio user spoke to another radio user they would send each other a card, usually postcard-size, with their name, call sign and location.

In the early days of Citizens Band (1960s and early 70s), radio users would often plaster them all over the walls near their set as a way of bragging about how much time they spent on the air and the power of their radio. These early QSL cards were definitely function over form.

CB user names, or handles, were not the norm on QSL cards in the 1960s. As the 1970s started, handles would start showing up on cards.

Often QSL cards showed people at their radio to show other users what kind of set they were using.

Steadily throughout the 1970s, QSL traders started adding art to their cards.A company called CBC Wholesale Club out of North Carolina provided stock art for QSLers. (I plan on a full post about CBC in the future).

However, sometimes CBers would draw the artwork themselves.

As the fad grew, people has a desire for cards that represented their handle or their lifestyle better than the crudely drawn cards. That’s when QSL artists became all the rage.

QSL cards became status symbols to collectors and CBers. It didn’t matter if you had spoken to someone over the radio anymore, it mattered if you had their QSL card.

QSL essentially detached itself from the CB craze and became a mini-craze of its own. However, much like baseball cards, the bubble burst and these cards were forgotten or just plain thrown out. I feel like the images should be preserved and the artwork shared.

I have had several art showcases showing the art of written multiple articles and a booklet on the subject that you can purchase here.

I will be posting a lot of cards on this site. Some will have stories, some won’t. Some will be drawn by trained artists who made quite a living drawing these cards, some won’t.

In the new few weeks/months/years I will be introducing you to some of the biggest names in QSL art and collecting. You will get to know such artists as The Viking, Sundown, Squeaky, Moonglow, Moonbeam, The Shepherd, The Brushstroker, Muzzleloader and especially Runnin Bare.

I will also being share stories, photos and items that collectors have been kind enough to share with me.

I have tens of thousands cards from all over the world and I hope you enjoy them half as much as I do.

Please drop me a line or leave a comment if you have stories about your days on CB or as a QSL collector. Every story helps paint a picture of this crazy world.

6 thoughts on “An Introduction to QSL”